The 2015 Patricia J. Lindley Volunteer of The Year Award Recipients 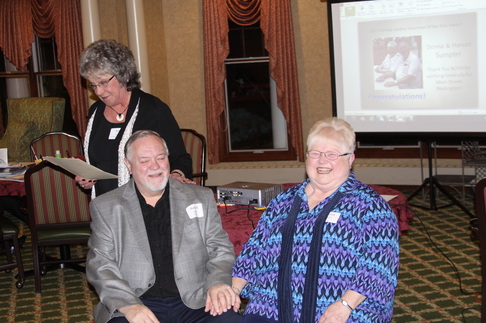 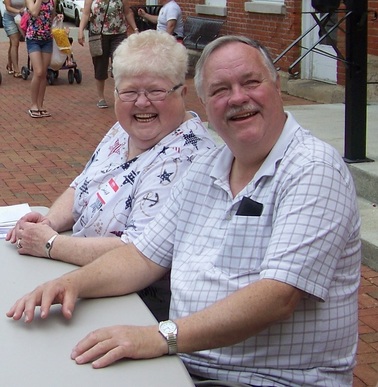 Written and presented by Patti Young:
​I don’t think I know a nicer person than Donna Sumpter. And when she puts her mind to doing something, she just gets it done. Donna grew up in the Kipton/Oberlin area, graduating from Firelands High School. Her mom, Ruth Shephard Krieg, grew up in Wellington so Donna visited Wellington quite often when she was growing up. Obviously, she met Harold during one of these visits because Wellington was where Harold grew up; and he graduated from Wellington High School.  Donna and Harold were married in 1969 and they settled in Wellington. They had a son, Jeffery, who was born in 1970.
During the mid-70s, Donna and Harold operated a place that was for teenagers. It was called “The Stable.”  With just a jukebox and a few pool tables, they provided a safe, fun place for teens to gather and just “hang-out.” They hosted at least one dance a month and had bands most weekends.  Harold told us that many dances attracted as many as 200 teens.
Donna enjoyed helping at the schools as a “reading mother.” She also helped start and then was Director of the Senior Citizen’s Bus Program.  While Harold was Captain of the Police Auxiliary, for 16 of the 25 years he served on the Auxiliary, Donna did a lot of work to support their fundraisers and make sure they were profitable. Donna’s hobbies are painting wood items, reading, and relaxing on her porch.

Harold is one of those guys that can do just about anything. If something is broken, he can fix it. If something needs to be done, he can get it done. Main Street Wellington calls him our “go-to” handyman. Front door doesn’t shut properly? Harold can fix it. Light bulb in that ceiling light needs to be replaced? Harold knows where that tall ladder is and climbs up to change the bulb. No problem.

Harold had a long career, 38 years, at Sectional Die which eventually became a part of Shiloh Industries. He retired in 2002.  Harold was elected to Village Council, a position he had for 12 years. Harold served on the Cemetery Board, the Hospital Board, and Kiwanis. Today, he keeps busy delivering “Meals on Wheels,” which he has been doing for 10 years.  Harold enjoys his home and yard, likes to find treasures at flea markets, and loves to tinker with his 1969 GTO.

Donna and Harold Sumpter have been involved with Main Street Wellington for 14 years.  The last two years they have taken an important lead role on two events for our organization -- the Gazebo Garden Walk and the Cheese Heritage Festival. The coordination of vendors, collecting funds, budgeting, calling volunteers, follow-up calls, thank you notes, meetings, driving here or there to pick up stuff, always answering their phone when I called – the list could go on and on….In a nutshell, both Donna and Harold are quick to volunteer for any task.

So, tonight, we want to thank you, Donna and Harold. It’s been a pleasure to work with both of you and I am honored to present this recognition of the “Patricia J. Lindley Volunteer of the Year Award” to you tonight. 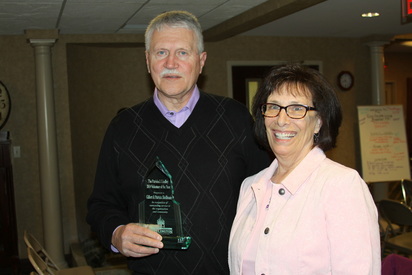 ​
Gil Shellhouse, a life-long resident of Wellington, actually lives in the home where he grew up on South Main Street. Many of us remember his mother and father, Gil and Martha Shellhouse, because they were teachers in the Wellington Schools. Gil earned his Bachelor's Degree from Heidelberg College and then went on to earn his Master's Degree in Education from the University of Akron. He taught at Sandusky Perkins, Columbia and Black River schools where he retired. While teaching, Gil coached football, basketball, soccer and baseball.

Pati Shellhouse who grew up in Elyria and graduated from the University of Toledo. She later received her Master's Degree in Education at Bowling Green State University. Pati spent 38 years as a teacher and guidance counselor in the North Ridgeville City Schools before retiring a few years ago. Pati has served on the "Friends of the Herrick Memorial Library" Board and is currently a volunteer with Lorain County's "Communities that Care" and SOLACE which helps promote the prevention of substance abuse.
​
For over 10 years, Pati and Gil, have worked hard and put in countless hours to organize the 5K/10K summer races at the Cheese Heritage Festival and, more recently, the Gossman Allstate Insurance 5K/10K Races in the Fall. Both events raise funds which support programs at Main Street Wellington and the Dukes Running Club. Each year, the races attract more and more runners. With Gil's ability to get out there and ask for corporate funds and recruit volunteers and Pati's eye on all the detail, detail, detail, the 5K and 10K races have resulted in meaningful money for both organizations. All of us would like to take this opportunity to say thank you, Pati and Gil. And congratulations on being selected Main Street Wellington's Volunteers of the Year. (written and presented by Patti Young) 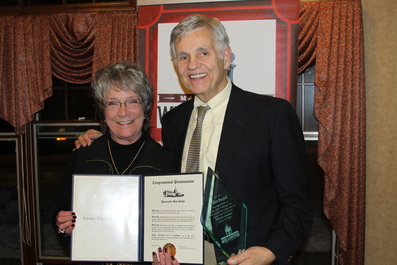 From time to time, the Board of Main Street Wellington recognizes one of its volunteers with a "Lifetime Achievement Award."
​
"Bill Brumfield [pictured with Patti Young] was a founding member of Downtown Wellington, Inc. (now known as Main Street Wellington) back in 1998. Over the years, Bill has been Treasurer of the Board of Directors, Chief Financial Officer for the organization and an advisor on the Finance Committee. Bill was responsible for working with Village officials to institute Design Review Guidelines for the Village of Wellington which resulted in the ability to capture over $1.6 million in Federal and State funds for improvements to our downtown area. Bill's dedication and financial planning have helped build Wellington into one of Ohio's top Main Street communities. 2014 was a very important year in Bill's life. He wrote a check to the Community Foundation of Lorain County for $1.25 million, half of the funding needed for the new community auditorium here in Wellington. He not only wrote that check, he went around town and personally spoke with individuals, businesses, and organizations to ensure that he could write that check. You see, his contribution was a dollar-for-dollar match. The project needed $2.5 million. Bill's choice for a name for our community's auditorium wasn't Brumfield Center. He, instead, selected the name The Patricia Lindley Center for the Performing Arts. His gift was in memory of his late wife, Pat Lindley, and an expression of the love he still has for her. Additionally, this is an expression of the love Bill has for the people of Wellington who will ultimately benefit from it. We know, Bill, this project was not about you; and we have let you think this. But tonight, we want you to know that it is all about you for a few reasons:
​
The overwhelming generosity of your gesture is really awesome.
Generations to come will have an unparalleled resource for entertainment, self-growth, recreation, socialization and so much more. The quality of life for the people of Wellington will be enriched. And This auditorium will contribute to the vitality and economic health of our community for years to come.

Thank you, Bill Brumfield, for all that you have done and continue to do for Wellington. Through your spirit of love for Pat and through your volunteer work for Main Street Wellington, you have set the course for a future in our community that is filled with wonderful possibilities. "(written and presented by Patti Young)

Sadly, we lost Bill in November of 2017.  He left a  long legacy of compassion, generosity, and kindness through his children, grandchildren, family, friends, and neighbors.  Wellington is a better place because of Bill.
Proudly powered by Weebly